Are You A Cultivator, Inventor, Explorer, or Trailblazer?

When planning the growth of your business and revenue, you have four basic marketing strategies to consider and pursue. Sometimes, the choice is relatively clear or dictated by marketing conditions; though there are times when all four approaches must be carefully weighed before the course is chartered.

You may choose among the approaches that we named Cultivator, Inventor, Explorer, and Trailblazer as they related to the market segments and your company’s offerings. Let’s briefly define them first: 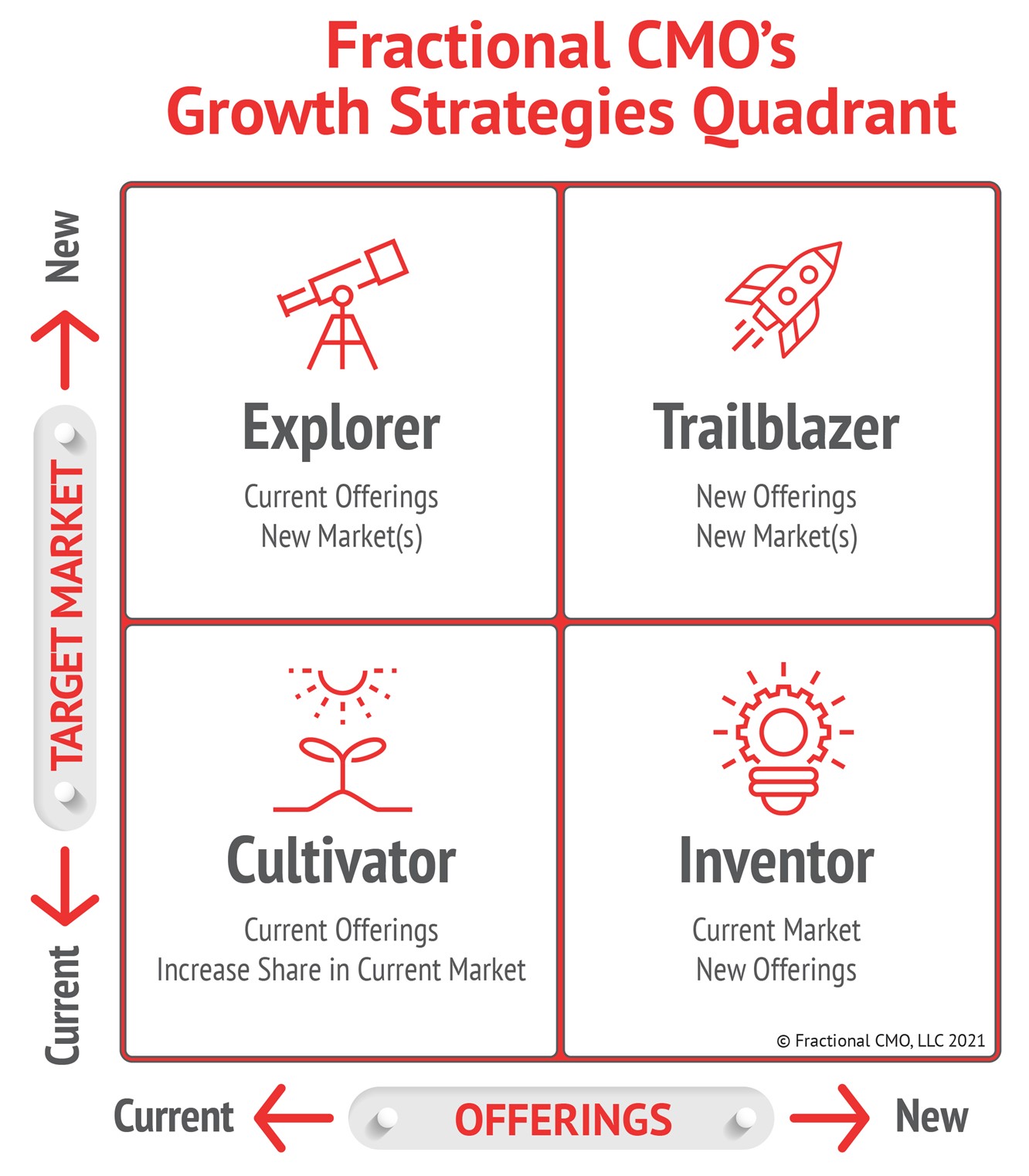 The above descriptions and explanations are just summaries. Deciding when to pursue what strategy is not always easy. Many variables must be carefully considered, including (but not limited to) market conditions, market size, customer needs, competition, market saturation, and resources requirements (people, knowhow, time, and money) and their availability.

If you are interested in an outside perspective and help deciding and pursuing your growth strategy, Fractional CMO & Marketing will be happy to work with you to make your vision a success.

“Fractional CMO cuts through the complexity of marketing and streamlines the pathway to success. They engage not as outside consultants, but as though they were an inside part of the team, with deep caring and loyalty. They are highly responsive to rapidly changing needs, and willing to work through bumpy places, and stay to find win-win solutions. The day you say “yes” to Fractional CMO is the day your business changes forever!”
DeAnna Murphy

Who Was the First Celebrity in a Super Bowl Ad?

It seems like famous faces have been in ads during “The Big Game” forever. With all the hype and anticipation leading up to game day, and in recent years, leaks and previews of our favorite movie and TV stars hawking products, we got to thinking – who started this phenomenon and when?

In 1973’s Super Bowl VII, the Washington Redskins took on the Miami Dolphins, and although not favored to win, Florida’s home team under Don Shula’s reign took the victory with a final score of 14 to 7. We’d argue that another winner that night was Farrah Fawcett, being the very first TV or movie celebrity to be in a commercial during football’s iconic yearly ritual. She starred with “Broadway” Joe Namath, who although a player with the New York Jets in 1973, he was not playing nearly as much as years prior, due to various injuries. Back then, a 30-second spot cost advertisers $42,000 (plus, of course, the cost of talent, which we aren’t privy to) – a far cry from the over $5 million price tag for an ad of the same length today. 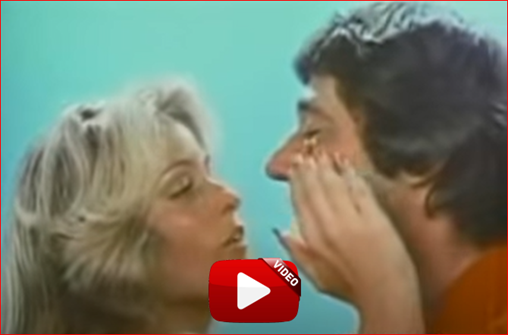 The stunning Farrah Fawcett was no stranger to being in advertisements for products, as well as being featured in articles, before 1973’s game between the AFC and NFC champion teams. It’s not a stretch to say she was an ideal that many women wanted to live up to, and many men wanted to live next to, which made her the perfect person to represent products marketed to both sexes.

Her catch phrase of “If you’ve got it, flaunt it!” certainly applied to herself, as you couldn’t turn on a TV or walk by a magazine rack in the 1970s without seeing her beautiful and healthy face and body on display. Some of her more well-known inclusions and endorsements include Cosmopolitan magazine (both on the cover and featured in articles and “Top 10 Lists”), Dubonnet (a wine brand that skyrocketed in popularity after she endorsed it with Tom Selleck in 1972), the sexy and rather suggestive ad for Noxzema Shaving Cream that we highlighted in this article, the 1975 Mercury Cougar, Lady Schick’s Speed Styler hair dryer, Wella Balsam hair products, Ultra Brite toothpaste, and her own brand of beauty and hair products through Fabergé.

Joe Namath could’ve competed with Farrah Fawcett for the number of products he did ads for during the same decade and well beyond. Some of his most memorable – and quite literally, just naming a few from a very long list – include Brut 33 men’s personal care, Hamilton Beach’s Double Mac (think George Foreman grill with indentations for burgers), Olivetti typewriters, Nike Zoom Air (sneakers that he tried to convince his wife would make it so his double knee replacements wouldn’t exclude him from a football comeback), Ovaltine, Hanes Beautymist pantyhose (which he unforgettably donned in the commercial), and Flexall 454 (probably the most believable, since it’s a topical product for relieving pain and stiffness).

Brand personality is a set of human characteristics and traits that are attributed to, and associated with, a brand.

Brand personality is a framework of qualitative value-add elements that provokes emotional and logical responses by the target market, with the intention of causing positive actions that benefit the firm. 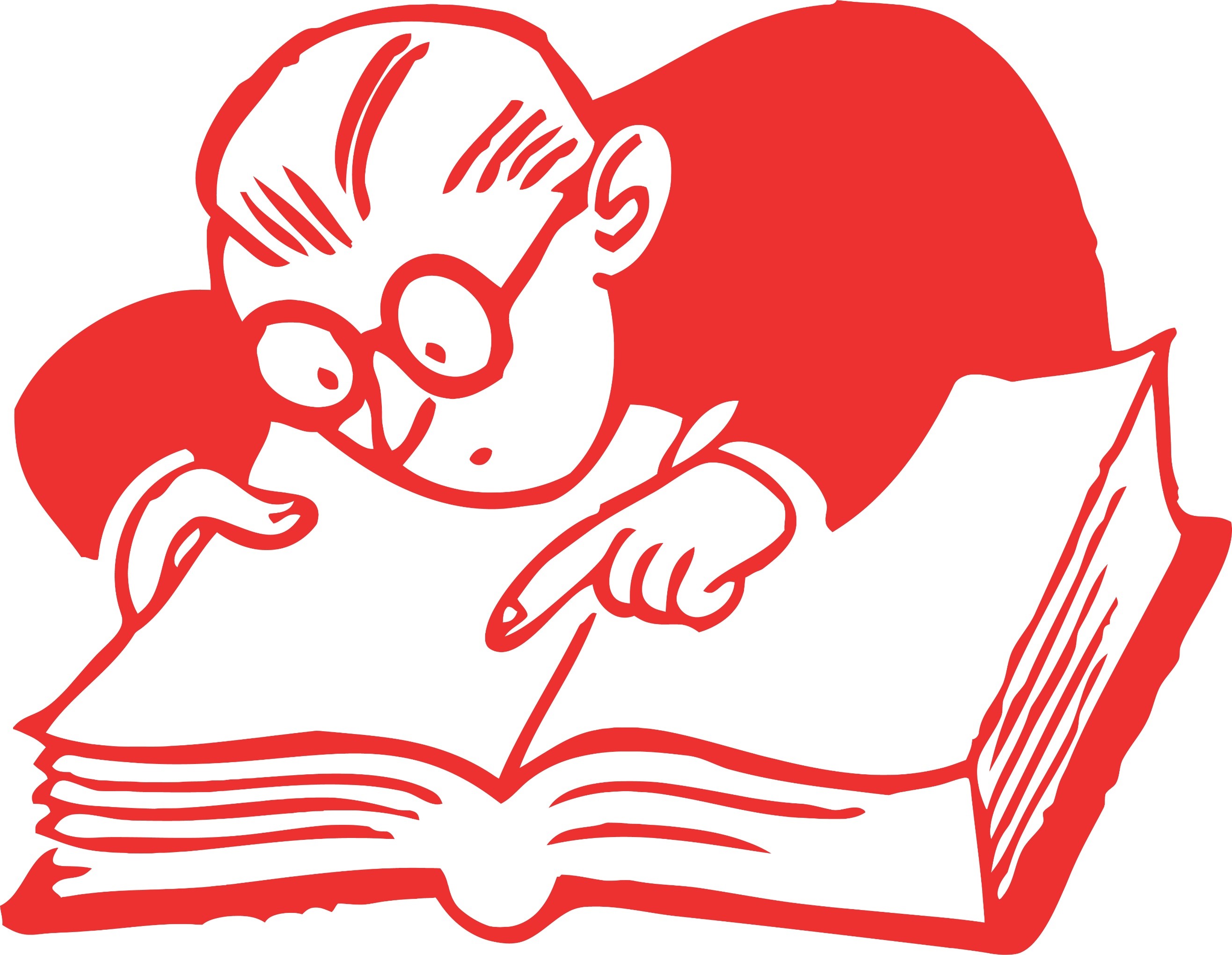 Over the years, sets of ‘predetermined’ trait categories like the “Five Dimensions of Brand Personality” (Excitement, Sincerity, Ruggedness, Competence, and Sophistication) and mapping techniques have emerged, but we find them all rather restricting and detrimental to the creative process. Instead, we prefer to define the brand personality freely.

For more information about Brand Personality or to help you determine and leverage your brand personality, contact us today!